, /PRNewswire/ --  (NYSE: SSTK), a leading global provider of imagery and music, today released its 2017 Oscar Pop! poster series which celebrates films nominated by the Academy Awards for Best Picture, using collection of over 100 million images. Now in its fifth year, the annual tradition challenges team of in-house designers to reinterpret one of the nine nominated films as a work of Pop Art, based on the style of an artist who inspires them. 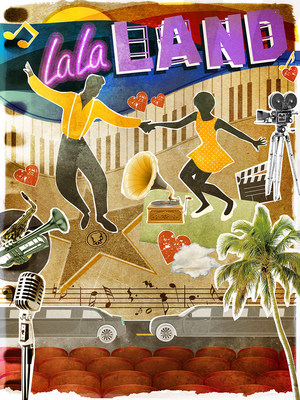 The designers analyzed the classic aesthetics of each artist, combined with the powerful storylines of this year's leading films, and created alternate film posters in various Pop Art styles. The results provide an intimate understanding of the plot and characters of the films as well as our designers' personal interpretations of them.

This year's list of nominated films that are featured include:

"Our annual ! poster series is an opportunity to flex our creative muscle and make something beautiful that not only celebrates the talent of , but also highlights the work of our 160,000 contributors around the world," said Chief Marketing Officer, . "This year, the nominations mix spectacle and emotion, making them the perfect source material and resulting in a fun, thought-provoking, and unique series that offers a fresh take on the leading films."

photographers will be covering celebrity arrivals from the red carpet, as well as the press room and a number of parties at this year's Academy Awards event.

About , Inc.
(NYSE: SSTK), directly and through its group subsidiaries, is a leading global provider of high-quality licensed photographs, vectors, illustrations, videos and music to businesses, marketing agencies and media organizations around the world. Working with its growing community of over 160,000 contributors, adds hundreds of thousands of images each week, and currently has more than 100 million images and more than 5 million video clips available.

Headquartered in , with offices in , , , , , , , , , , and , has customers in more than 150 countries. The company also owns Bigstock, a value-oriented stock media agency; Offset, a high-end image collection; PremiumBeat a curated royalty-free music library; Rex Features, a premier source of editorial images for the world's media; and Webdam, a cloud-based digital asset management service for businesses.

To view the original version on PR Newswire, visit:http://www.prnewswire.com/news-releases/shutterstock-launches-its-fifth-annual-oscar-pop-poster-series-300412245.html